I haven't made french toast in years, so I have no idea what possessed me to make it with Pumpkin Chai! But I did. LET ME KNOW IF I DID ANYTHING WROOONG

So, I started off by boiling some milk (I used skim) and Pumpkin Chai. I'll put the measurements of everything I used, and straightforward directions, at the bottom. 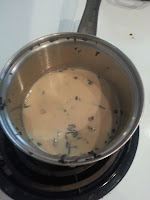 Then I strained it and let that shit cool! 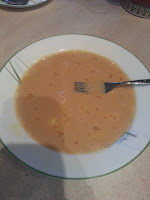 Mix with the 1 egg, that I beat with a fork (if the milk isn't cool, you risk cooking the egg! Which would be super gross.) 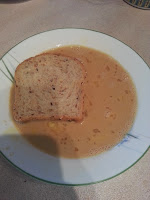 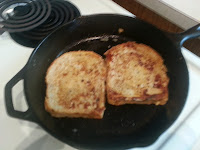 I found that maple syrup brought out the taste of the pumpkin chai, which I needed. Next time I'd use 2 tbsp. So I'm putting 2 tbsp in the recipe at the bottom.

Overall, it was a success, and I'd do it again, but just a little differently. 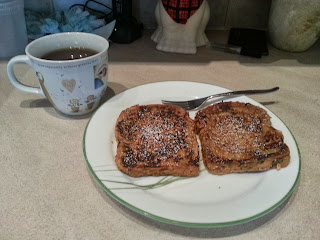 FOR YOUR EASE OF READING:


1) Put the milk and the tea in a pot, boil it for 5 minutes, stirring so it doesn't boil over. WATCH CAREFULLY. MILK BOILS OVER EASILY. TRUST ME
2) Strain into a bowl, let cool.
3) Once cool, mix with egg, put on a plate. Add vanilla to the mixture, stir.
4) Saturate the bread (not until it is impossible to pick up!)
5) Heat your pan of choice, use oil or cooking spray to keep it from sticking! (I used my handy cast iron pan)
6) Put that shit in the pan. Cover with lid, cook until golden brown. (Or burnt, if that's your preference)
7) Flip that shit. Repeat #6.
8) Put that yummy French toast on to a plate, and top with icing sugar, a dash of icing sugar and cinnamon, a healthy pour of maple syrup.
9) CONSUME.