I got this as a sample in an order from Tea Desire. One thing I would greatly like to emphasize about Tea Desire, is that their samples are enough product two make TWO generous spoonfuls of tea. You can make two pots worth with a single sample.
THAT is how you do it.


I steeped for six minutes and made enough for two cups.
No, I was not able to convince Chris to have a hot cup of tea with me. I am just soaking wet from standing in the rain waiting for the train home and I am cold.

This tea smells a little bit like Christmas. The strong notes of apple and pomegranate are probably what has me steering in that direction.

It is called pomegranate raspberry, but I really don't taste any raspberry. And though I can smell the pomegranate, I can't taste it! Mostly apple, rose, and mango paired with the rooibos that stands out, flavour-wise.

Though an excellent flavour, not at all what you might expect. You never know what you might get. I wanted more raspberry flavoured teas, but this is still really good. Everything works really well with the rooibos.


Definitely worth a trip to your local (or online) Tea Desire.

Posted by Unknown at 4:27 pm No comments: 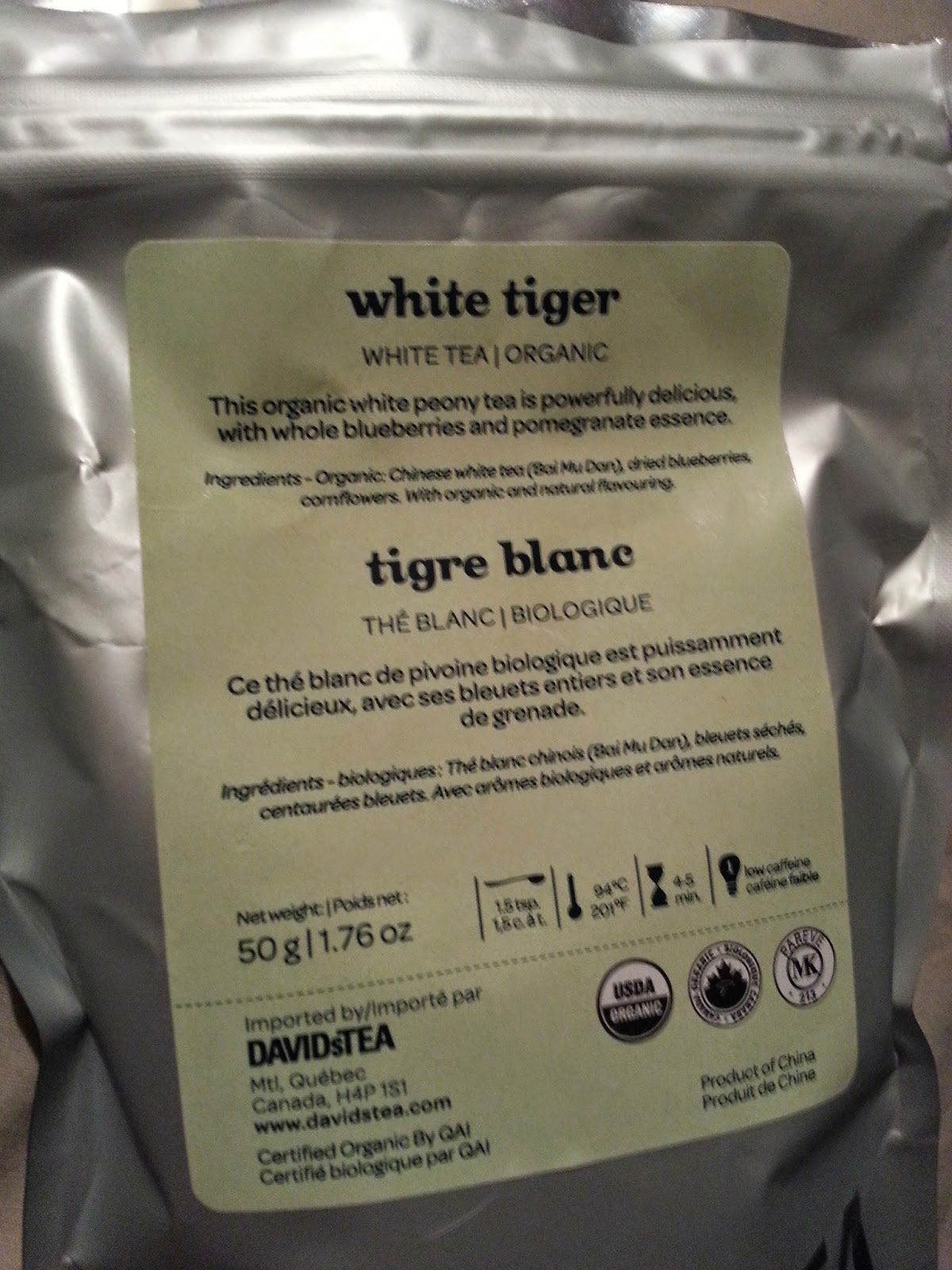 This tea is discontinued. So no matter what I think, I WON'T BE ABLE TO GET ANY MORE. DavidsTea has a thing against good white tea I guess

White Tiger by DavidsTea smells divine. Like holy shit. I stepped it for a few minutes, and used 1.5 scoops with the DT scoop. Because I'm hella predictable and hella lazy. I then let it sit until cool enough to drink...so like, 5 minutes?

And holy shit. I regret drinking this tea.

Because it is so. Fucking. Good. Holy shit. It's sweet and light and has a bit of a bite to it. It isn't as good as Sweet Strawberry, thankfully, but it is really really good.

I just can't deal with THIS white tea being discontinued too! UUUUUUUUUUGGGGGGGGGGHHHHHHHHHHH


Honestly, I thought that this tea was going to suck. (pretty sure that's why Laura gave me her sample of it - so she didn't have to try it... the fiend!)

This tea really surprised me.
Now, it's nothing to get me jumping up and down and screaming to the heavens like milk oolong, or raspberry oolong (if we are sticking with a fruity oolong theme), but I actually liked this tea. It's unique, and if you love pineapple, DEFINITELY don't skip buy this one.

You get a perfectly even balance of everything... if you add a pinch more Tie Kwan Yin like I did. LOOK at that sample I got. There was practically NO tea, so I used some of my plain Tie Kwan Yin and added a couple leaves. Is that cheating? I would imagine that if you got a couple grams from the store you wouldn't get so shafted on the tea - so I did not cheat. I didn't.  ... maybe a little... I made it FAIR!

But I digress... the apricot smooths out the pineapple, removing all acidity, and the tea is still the major contributor. Like I said, I am very impressed. Give this a try, you may be just as impressed as I was. And it is priced around the same range as the average tea in DT's collection.

Posted by Unknown at 6:07 pm No comments:

Around the World: Organic Saigon Chai 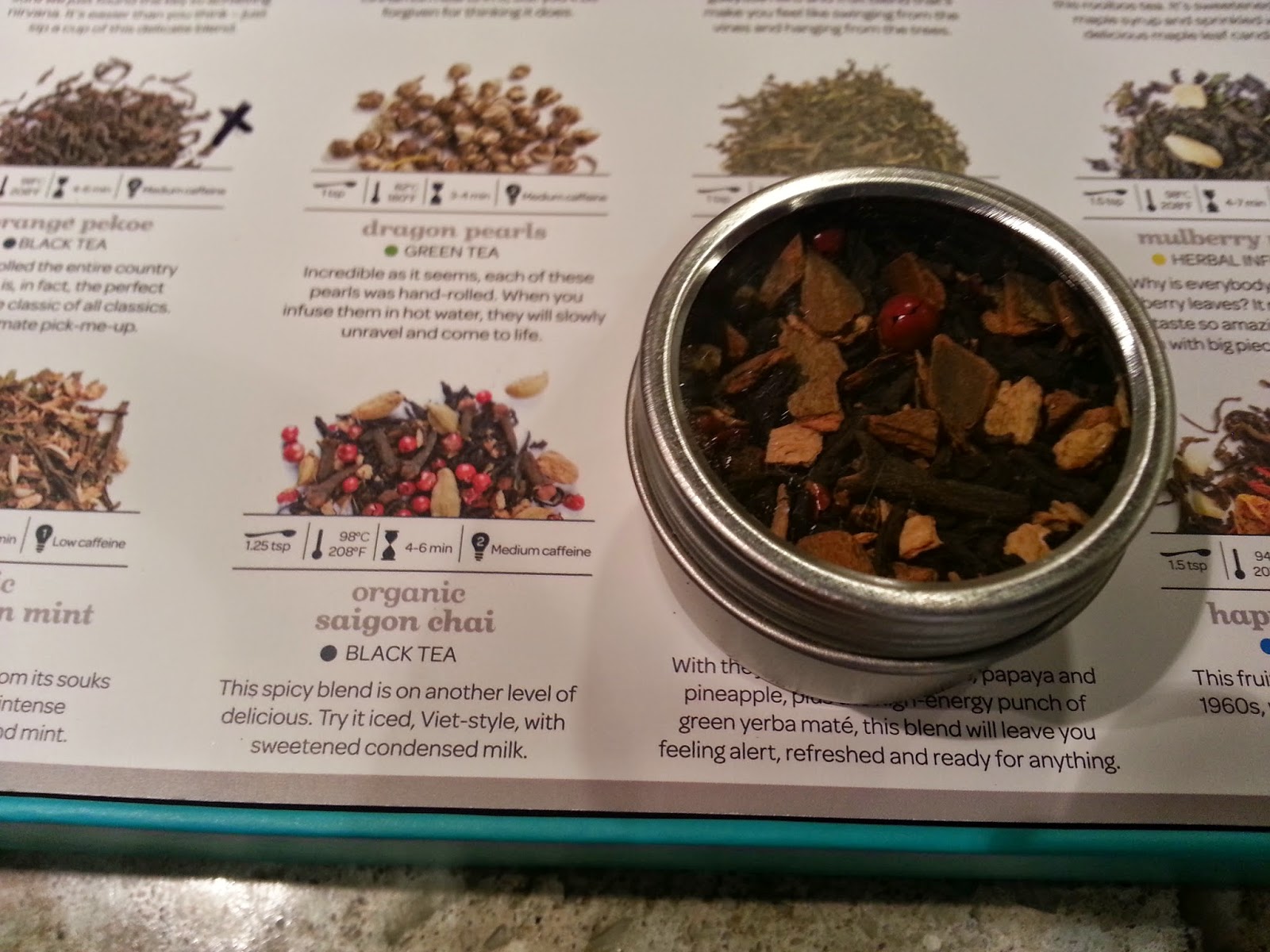 Okay, I've roused myself from my funk because life gets to be a lot sometimes. And to help, I have decided to do a chai. Because chai is amazing for the soul.

I was told to steep chai in a pot on the stove. I'm going to use a double boiler, because I really don't want to burn my milk, and some plain white sugar.

Firstly, let me just say the Saigon Chai SMELLS a lot better than the Pure Chai I reviewed almost a year ago but posted in March.

I steeped the sample, which is worth TWO perfect spoonfuls, in a large DavidsTea filter bag. I basically just pinned the top under the lid of the double boiler and let it sit in the hot skim milk, occasionally moving it around. It steeped for probably 5ish minutes. 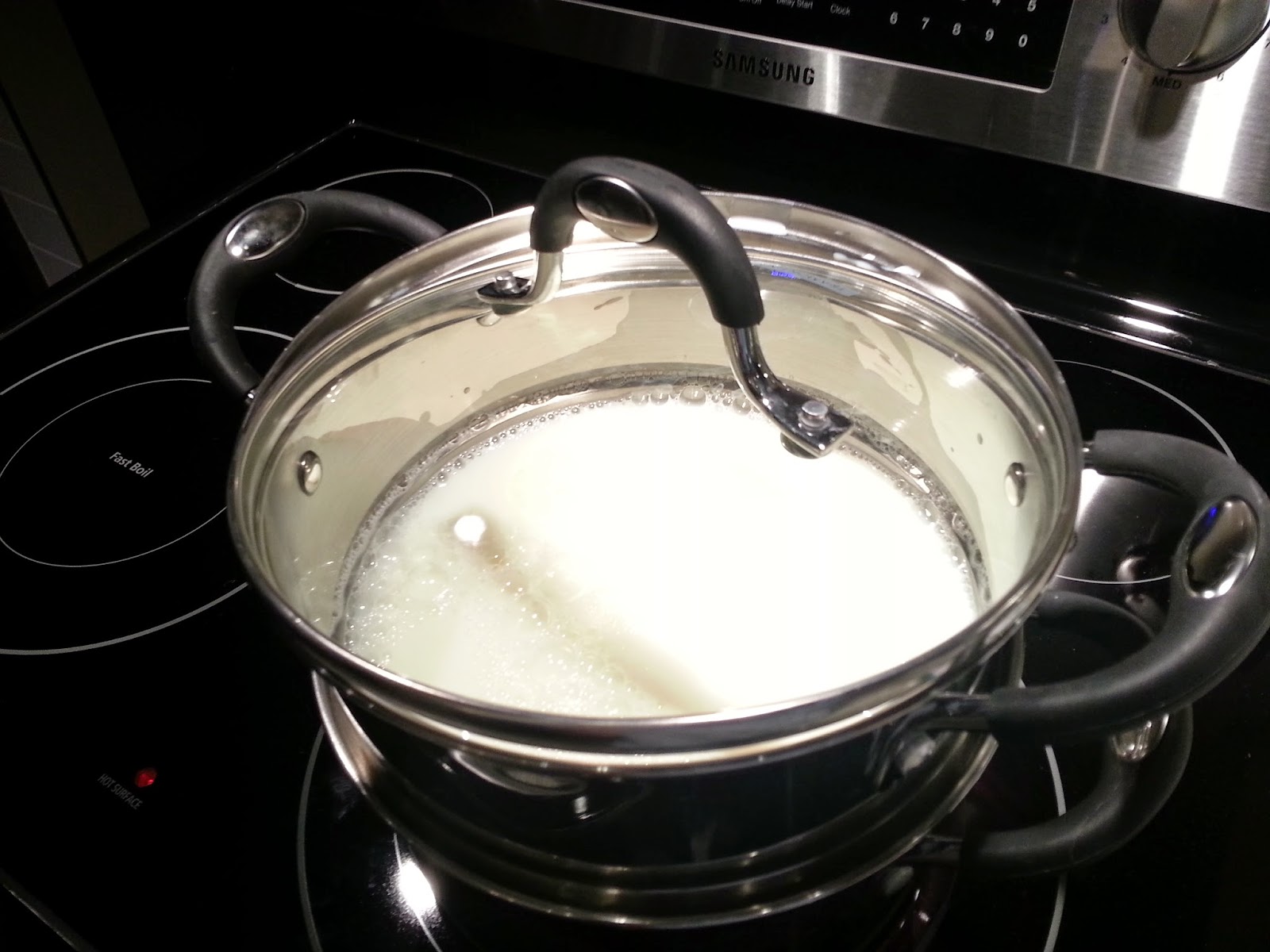 And you know what, it smells better than the Pure Chai, and taste a lot better too. There is none of that dusty taste, and it is a great strength (although I would probably steep it just a little bit longer, maybe an extra two minutes). For sweetness, that's really more of a preference type thing, and I tend to enjoy things a little bit on the sweet side.

I'm buying more of this tea, because it will give me a way to make a Chai tea latte with eggnog come eggnog season. BUT IT'S STILL AUGUST. IT IS STILL SUMMER.

SUMMER. NOT AUTUMN. NOT WINTER. SUMMER.

Continuously living in denial of the change of seasons,

Laura
Posted by Unknown at 8:30 am No comments:


In lieu of recent sad events, I figured I could use a cheerful, crazy tea; it seems only fitting. 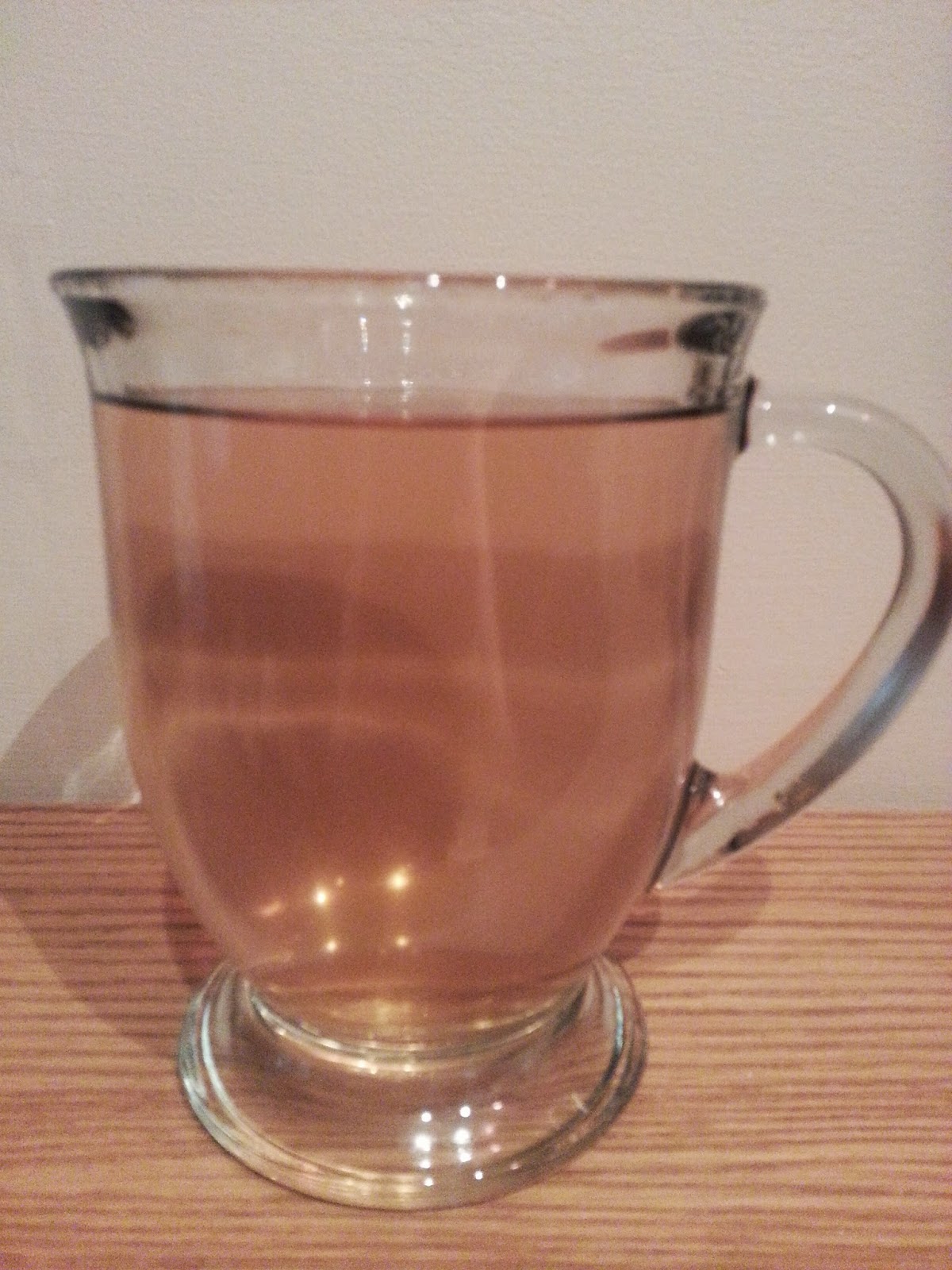 The ingredients in this tea are complete madness! Madness that smells like complete deliciousness!! Wow.
It does make me think of caramel-assaulted popcorn. Even if I did not get any pieces of popcorn
inside of my sample. Actually, considering the lengthy list of ingredients, I have a feeling that I may not be getting the real nature of this tea considering how plain everything looks.

I steeped for the full seven minutes suggested, and I was a little bit disappointed by the colour. It looks very pale, I was expecting to taste water that someone dropped a Wherthers in to. I wasn't completely wrong, it is very weak. You just don't get enough in a sample.

But, if you actually got a full perfect spoonful, I think this would be a really delightful, sugar-y tea.
You get a lot of apple flavour, so maybe it would have been more apt to call it Caramel Apple. It really does taste similar to the way that it smells.

Wrapping this up; it is definitely worth giving a try if you are a fan of caramel. I think I might actually buy some. I really enjoy the combination of apple and caramel.


Happy Steeping,
~K
Posted by Unknown at 7:26 pm No comments:

Is totally not happening today.

My cat died on the weekend. I'm sad. I've got other stressful shit going on.

So yeah. I'll be back next week, and I will be functioning. But for today, I just don't fucking care.

If you're remotely displeased with me, then, well, fuck you. 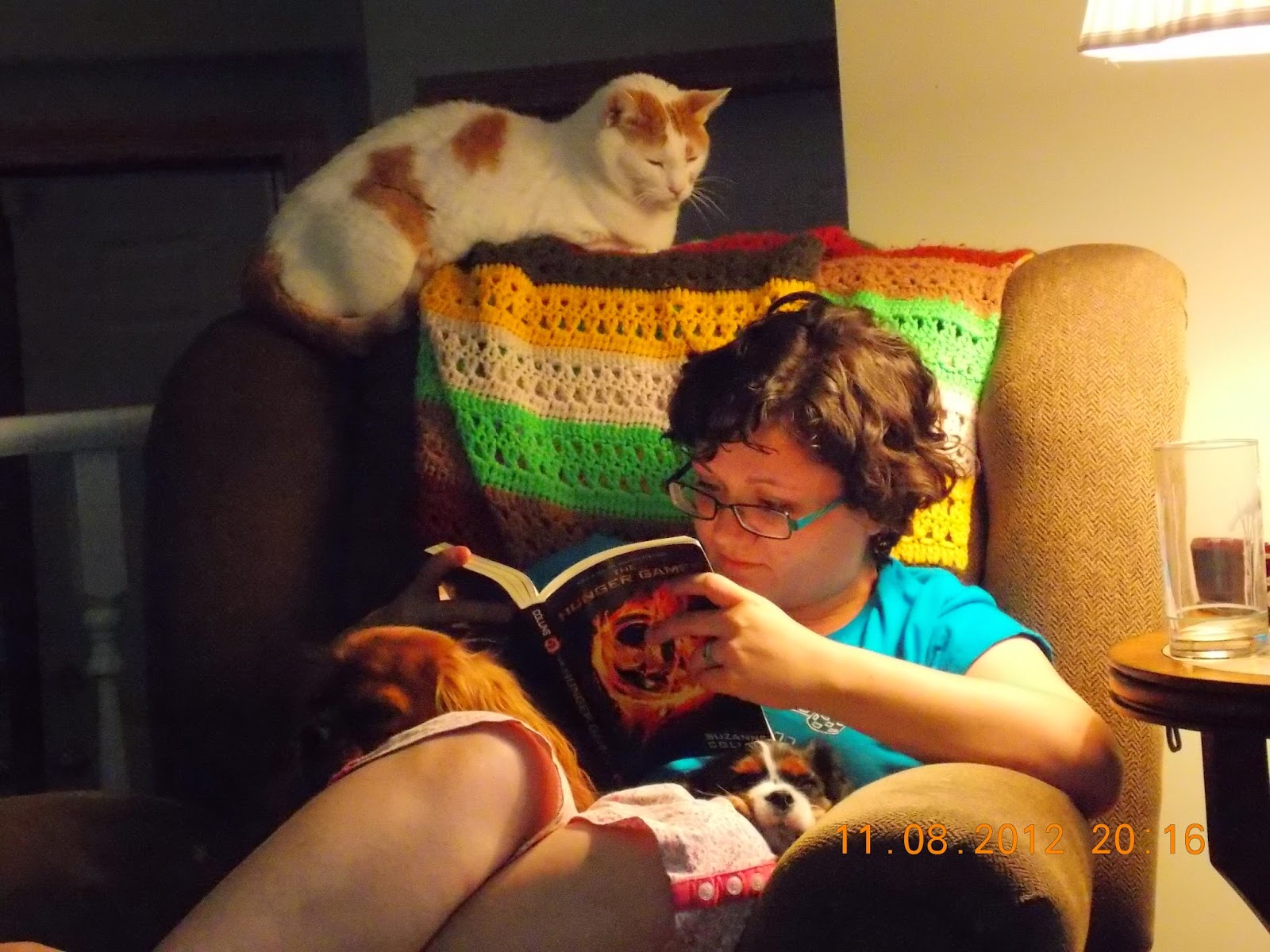 
I have been wanted to try this tea for quite some time.
What was stopping me? It is the most expensive tea that DavidsTea sells! Twenty dollars for fifty grams!
What finally got me to buy some? The fact that I didn't have to buy it! I used my DT frequent steeper points and got 50 grams for free! (I used the other 50 grams of free tea I had saved the points up for and got more Quangzhou milk oolong)

Not going to lie, I had my nose inside of the bag the entire drive home from the mall. I think I told Chris "This is the best smelling tea ever" about fifty times within those ten minutes. This tea makes Dragon Pearls jasmine smell like afalfa.

It tastes exactly the way that it smells.
This is the smoothest, creamiest jasmine I have ever had. It is beautiful. The floral accents are at the perfect level and there isn't a hint of bitterness. I'm sure that the second cups worth that is still in the pot may be a little too strong by the time that I get to it, but it won't be long. I am powering through this absolutely perfect cup I have right now.

I was wrong. Even with the second half of the pot sitting for fourty five minutes, it is not at all bitter or overpowering; just stronger and still delicious and perfect!
Holy shit, this tea is magical! 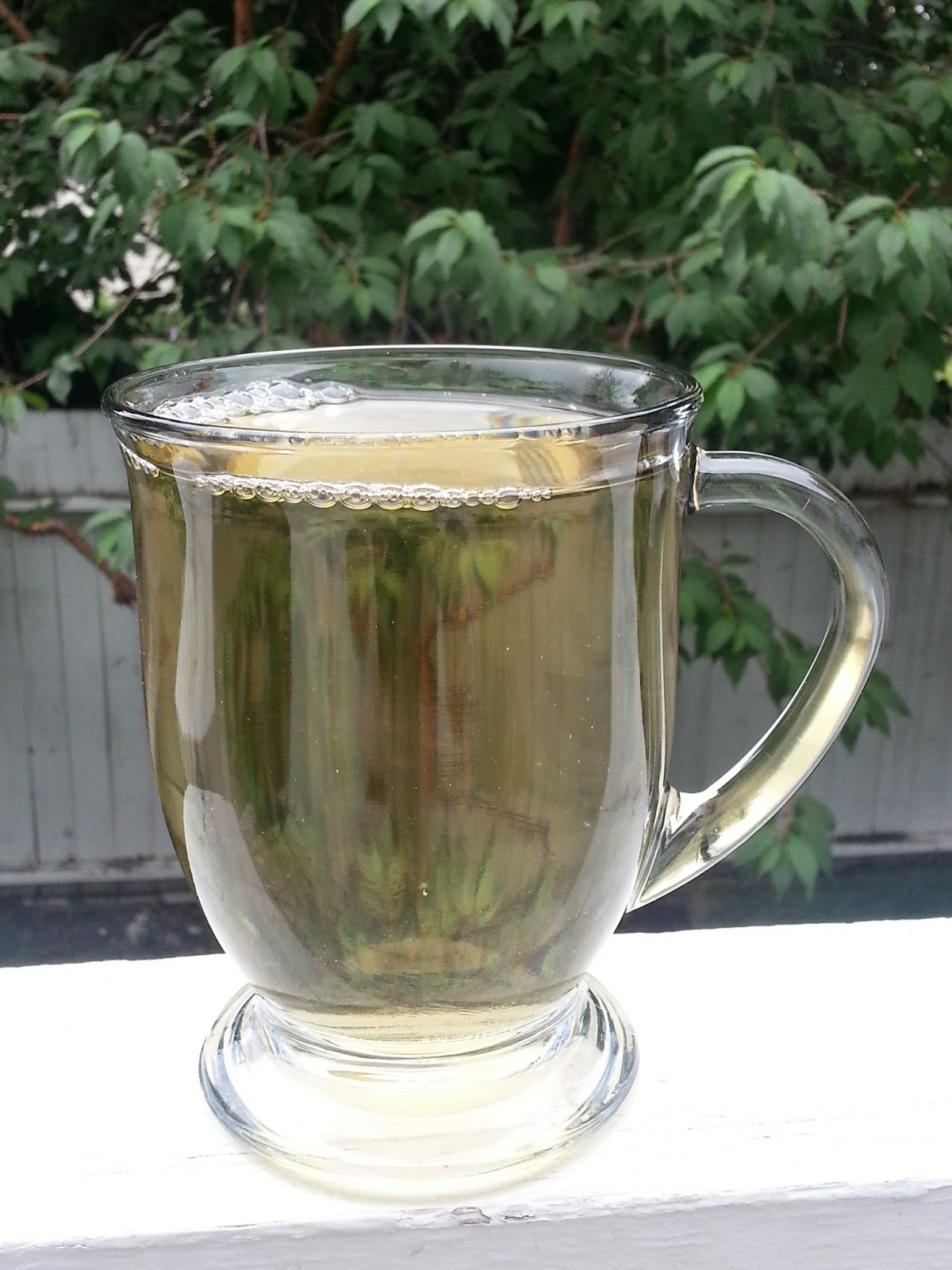 Beautiful.
Everyone should treat themselves to this tea at some point in their lives.
I am in LOVE.

Best tea?
I might just have to say YES.

Update:
Yoshi loves it so much he is trying bathe himself in it!
Posted by Unknown at 12:00 am No comments: 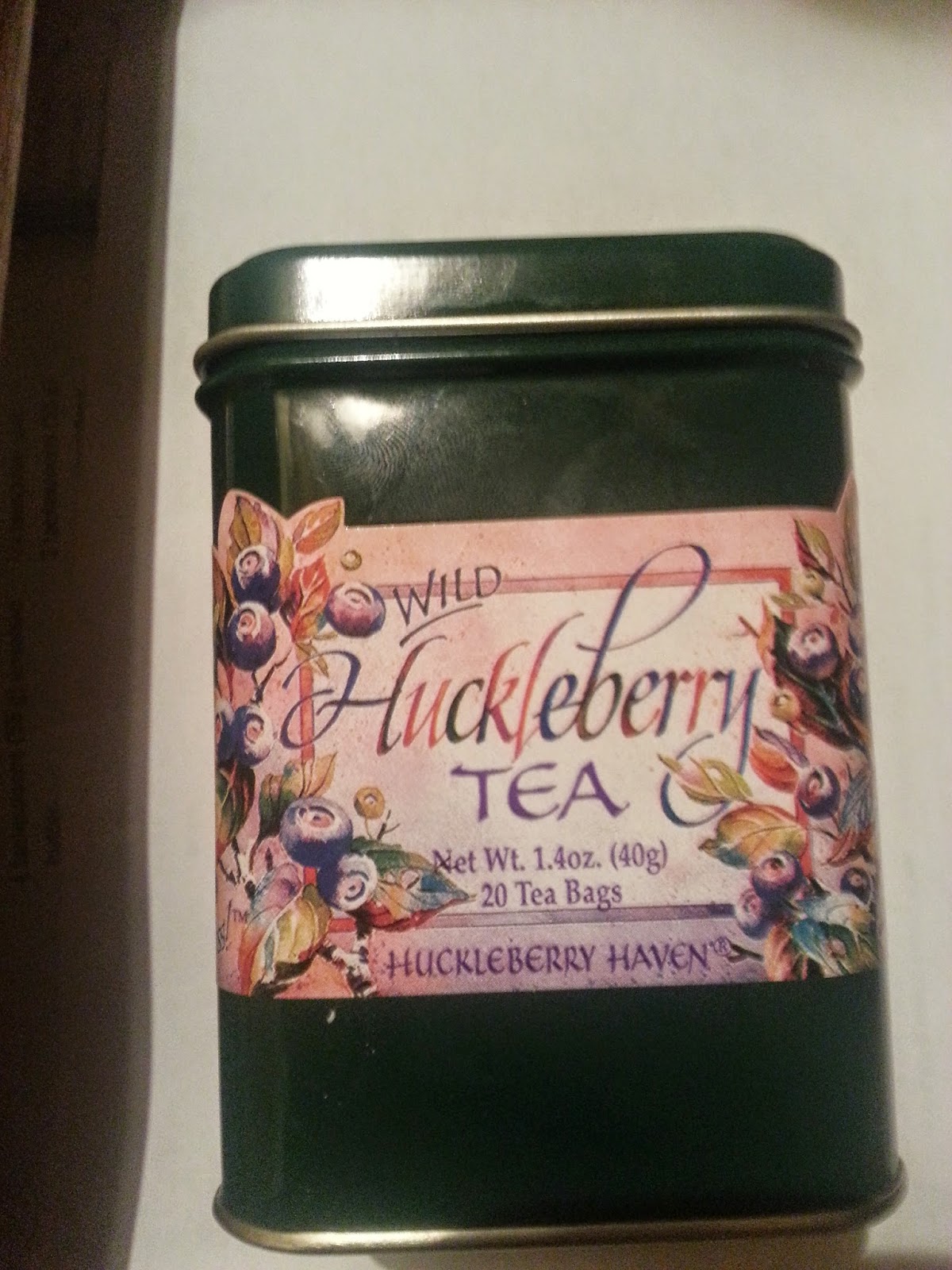 My mom got this tea for me when she was in Coeur d'Alene on a mini-vacation.

I loved Coeur d'Alene before, but now that I know you can get this tea from there. I love it even more!

They literally used natural huckleberry oils for flavor, and just black tea. Like it's amazingly simple, but it's also amazingly amazing. You can taste the black tea, but it is a very yummy, very laid back flavor. It allows the berry to shine, and they very much so compliment each other. I've definitely had some other flavored black teas where you drink and the tea and other flavor(s) and just there together, instead of actively working together to make your mouth happy.

I don't really have any pictures because I'm a tool and forgot to take pictures until I was done. And I only have 18 bags left so I'm not wasting any!

I can't wait to make this as an ICED TEA though. I'm making it for this upcoming weekend. I'm going to a cabin and horse riding and woooo.

But seriously. Drink it. You won't regret it. I'd buy it just to SMELL it!

I've been slacking with my reviews I promise I'll try to do better
Posted by Unknown at 8:30 am No comments:

Incredibly sweet, especially if you steep it for as long as I did (someone left it in the fridge to cool and forgot about it... me). But it isn't bad, and you definitely get a lot of the flavour if you're going to ice it.

It was a little difficult for me to put my finger (or would that be tongue?) on the flavour of the tea itself, but it is hiding in there. And really, with something named after a treat that is just sugar and air,  how much of the tea are you really expecting to stand out?

Sugar-y madness. Definitely a treat and not an every day sort of thing, in my opinion.

I certainly don't need any more of it, but I'm sure kids would go mad for it! Or any of those people who like to go about half-and-half with their sugar to tea ratios, hahaha!