Ooo the first of my Fall tea reviews!

How exciting! You're getting a review as I drink it for the first time! You lucky ducklings. Mom's Apple Pie...

When you open the bag, it literally smells exactly like an apple pie cooking in the oven. As it steeps, you get an entire room lightly smelling of baking apple pie!
Ingredients wise, it's very simple. green tea, apple pieces, cinnamon, natural and artificial flavoring. 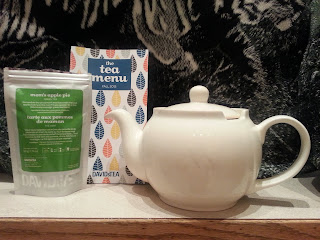 It's a very gentle tea, I put 1 tbsp to a pot, and steeped it for the 3-4 minutes, next time I'll add more leaves, but keep the steeping time the same.

It tastes quite nice. Bright, warm. It tastes a little like apple pie...
Picture you had a bite of apple pie, swallowed, then washed it down with a gulp of green tea. That after flavor of apple pie is essentially what it tastes like.
Letting it cool a bit helped bring out some of the flavors, so I really recommend NOT drinking it piping hot. You end up losing a lot of the flavor that way.
The cooler mine got, the better it tasted. Just above warm was the best. So it was still hot, but just barely. I doubt that makes much sense but...fuck it.

It is ranked medium caffeine by DavidsTea, so probably not the best to have before bed, especially if you're sensitive to caffeine, but I don't have to wake up early tomorrow, so screw it. In fact, I think I'll make myself some more in the morning!

UPDATE:
I made a stronger pot in the morning, with 2 tbsp of Mom's Apple Pie, and it was not as good as the 1 tbsp. I steeped it for exactly 3 minutes, and it still turned a kinda bitter. It was the right strength just...bitter. Maybe 1.5 tbsp would work?

I'm not really sure if I would restock this one come end of Autumn. It being very finicky makes it less apPEELing. (Get it, a-PEEL-ing, like when peel and apple? >_> shhhh my pun isn't lame at all... ) No, but in all seriousness (tea is srs business), I decided not to restock this tea. It just doesn't do enough for me

Overall I rank it as good when it's quite mild, but when it gets stronger, it isn't so good. Even when steeped for the minimum time it says on the pouch.
If you like teas that are milder, you'll love this one. It shines when it is brewed to be mild; the balance of apple and green tea is great. But, as a person who loves a much stronger tea, it just isn't for me.
Or, if you like teas on the more tart or bitter side AND strong teas, you may like this tea. Still, no guarantees.

I gave the rest of my pouch to my green tea loving co-worker, and her and her husband absolutely love it!


Skål, and happy steeping everyone!


IF YOU HAVE ANY TEA YOU WOULD LIKE REVIEWED, LEAVE A COMMENT AND WE WILL SEE WHAT WE CAN DO.