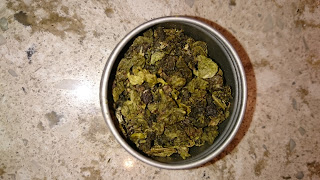 Not gonna lie, I kinda don't like this tea. Like at all. Quangzhou Milk Oolong by DavidsTea is so blaaaahhh to me.

I steeped it as you would any oolong, did two flushes- even though the second flush was better, it wasn't as good as the Tea at Sea oolong I have. And just realized I've never reviewed it even though I adore it. That's going to have to happen!

The first flush was so blaaaah. I tasted basically no milk or honey, just some basic green tea flavors.

The second flush gave a bit more of the milky taste, but not by much.